Most people fear venomous animals, but a small portion of the world is so fascinated by their existence that they want to have them as pets…and guess what, it is possible to have venomous animals as pets.

However, not every venomous animal can be kept as a pet. Let us discover the top 4 venomous pets that are legal to own…

The Gila Monsters are not very common; they are considered the only actual venomous lizards in the world. Only 13 out of 50 states in the U.S. do not allow ownership of a Gila monster; the other either allow the ownership with or without a permit (depends on the state).

The Gila monster is one of the world’s few genuinely venomous lizards. These fascinating and distinctive reptiles may spend up to 80% of their days inactive in underground caves, but they are most active in the spring months due to the abundance of their favourite meal, bird and turtle eggs.

Even though these lizards are highly venomous, they will not bite unless harassed in the wild. In truth, no one has ever died due to a bite from a Gila monster.

They must be obtained from captive breeders as pets in the places where they are legal, and these lizards are likely more docile than wild ones. Some people find it advantageous to have Gila monster as a pet as they do not require much attention and care.

Blue ring octopuses are legal in almost all states, but there are some regional laws that you should abide by. They are very toxic as they can cause respiratory failure.

Even though they are very attractive, they remain among the deadliest species of cephalopod. Their saliva contains a toxin that causes muscle paralysis also the diaphragm, leading to respiratory failure. Despite their level of toxicity, they are still kept as a pet in some home aquariums.

Typically, their first prey is crabs, but if you pick it up bare-handed, it will feel harass and bite you. Most of the time, cases haven’t resulted in death as medical intervention and respiratory support have been provided.

It is important to know that octopuses are pro in escaping, and someone unfamiliar with their toxicity may pick them up. 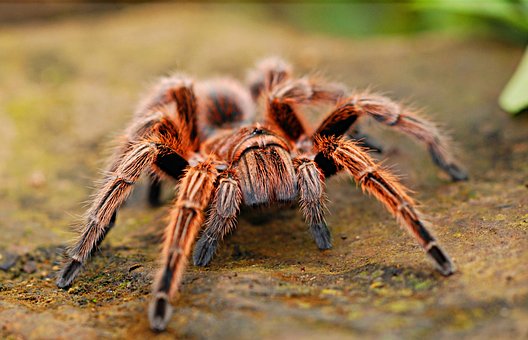 This is a very common pet, legal in almost all states. Some spiders are known to be deadly, but tarantulas are not one of these. They have a low level of venom toxicity; most of their bite results in non-severe localized pain.

Tarantulas will not bite you unless they feel threatened, and the only outcomes of a bite are redness, swelling and pain in that specific region. However, it is good to know that different types of tarantulas have different toxicity levels. Some may only feel like a bee sting.

Most scorpions species are known to be legal. As there are about 90 species in the U.S., their level of toxicity depends on the species. Some may afflict a little pain, while others may be deadly. However, it is good to note that all of them are venomous. The estimated annual number of scorpion stings is 1.2 million leading to 3250 deaths worldwide, but it is rare in the U.S.

It is important always to be cautious when handling scorpions. The most popular scorpion kept is the emperor scorpion which rarely stings. You can buy them online, including the most venomous in the United States known as the Arizona bark scorpion and the deathstalker.

Despite their venomous nature, they are very popular pets in the United States. If you own a venomous pet, you should learn how to handle them with care or result in fatalities. Let us know in the comments if you are a venomous-pets lover…